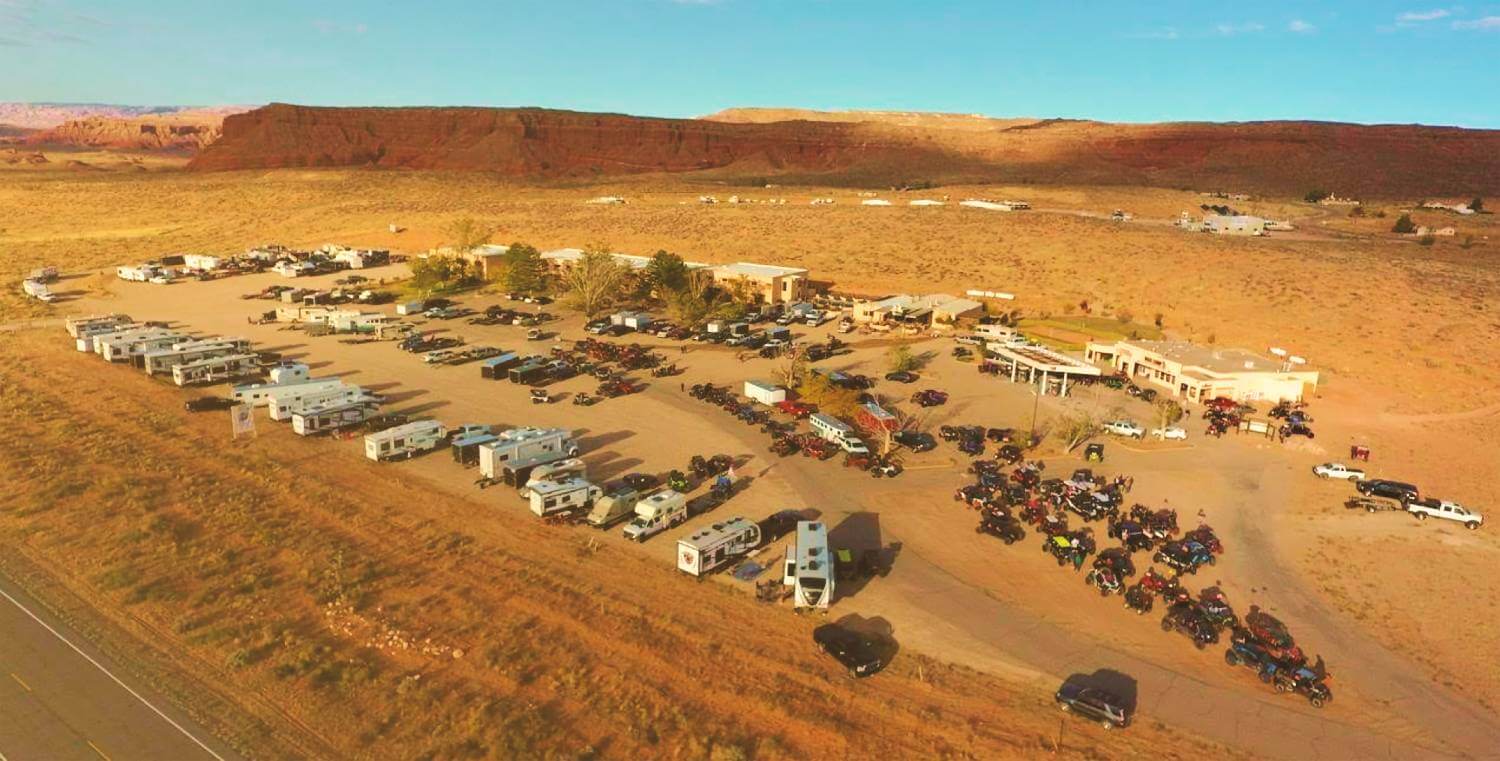 Hite is named after a ghost town at the north end of Lake Powell along the Colorado River in western San Juan County, Utah. Lake Powell, and all of its points of interest, is in the Glen Canyon National Recreation Area, managed by the National Park Service and available to the public for recreation. The town existed on land that Lake Powell now covers. Historic Hite was named for Cass Hite, an early settler. The name was transferred to the National Park Recreation Area at the north end of Lake Powell. The Hite Crossing Bridge, near the marina, carries Utah State Route 95 over the Colorado River and connects the area to the north of the lake.

Hite is a remote Ranger District located at the top of Lake Powell, adjacent to the confluence of the Colorado and Dirty Devil Rivers.

Jeep trails, backpacking, canyoneering, mountain biking, cycling, canoeing, kayaking, boating, and fishing are some of the many recreational opportunities. River rafting down famous Cataract Canyon from Moab to Hite is also a favorite.

Water Based Services: The North public launch ramp is concrete. The South public launch ramp is gravel. Watercraft launching at Farley & Blue Notch Canyons are primitive dirt ramps. At current lake levels, none of these launch ramps are in service. The river raft take out ramp is gravel. Boat launching is at your own risk. Four wheel drive vehicles are recommended for all launching. Contact Hite Ranger Station for current conditions.

Land based facilities include the Hite Ranger Station with emergency services, visitor information, public restrooms, and a fish cleaning station. A convenience store is open daily with gasoline and diesel fuel available year round. Lodging and RV full hookup sites are available with a reservation. Primitive camping is allowed along the shoreline, campground, and designated backcountry sites. RV and portable toilet dump stations are available. Potable water fill stations are also available. Backcountry Permits for Orange Cliffs are issued by the Hans Flat Ranger station at 435-259-2652.

Cass Hite lived in Glen Canyon as long as anyone except the Ancestral Puebloans. Cass, who had been prospecting in the Navajo Mountain country, arrived in Glen Canyon in September, 1883. Cass was looking for gold, and he found it in the sands and gravel along the Colorado River. His discovery set off the Glen Canyon gold rush.

Cass Hite had reached the Colorado River by way of White Canyon, and near its mouth, he’d found a good place to cross the river. He named it “Dandy Crossing.” Indeed, it was the best crossing of the Colorado River above Lees Ferry. The many prehistoric sites in the area suggest that this river crossing was well known to early inhabitants as well as to the Navajo.

Hopeful prospectors soon headed for Glen Canyon and the town they named “Hite City.” But the gold the miners found was all fine gold dust, difficult to recover, and mining operations soon petered out.

Cass Hite built the first structure in the townsite named after him. It was a cabin of notched logs salvaged from the river. A post office was established in 1889. Mail was brought by horseback from the railhead at Green River, 100 miles away. Cass and his brothers operated a small store in conjunction with the post office, services much appreciated by the miners and others passing through. Cass died at his ranch in Ticaboo Canyon in 1914.

All was quiet in Glen Canyon after World War I, but the onset of the Great Depression brought a revival in gold prospecting. Arthur L. Chaffin, who had prospected around the turn of the century, returned during the depression, bought up properties at Hite, and began to develop them, hoping to open Glen Canyon to the general public.

It wasn’t until 1946 that a fair dirt road was completed between Hanksville and Blanding, Utah. Regular ferry service across the Colorado River began at Hite on September 17, 1946. (Before that time, one had to cross the river as well as one can – swimming the horses and mules or trying to find a boat!) The ferry operated until June 5, 1964, when it was taken out of service as Lake Powell filled the canyon and bridges were built.

In 1949, the Vanadium Corporation of America and the Atomic Energy Commission built an experimental mill for the reduction of uranium ore. This mill stimulated uranium prospecting in Glen Canyon, and a small boom camp was built in White Canyon. A post office was established, and a one-room schoolhouse was built. But the mill shut down in 1954, and the camp became a ghost town.

The North public launch ramp is concrete. The South public launch ramp is gravel. Watercraft launching at Farley & Blue Notch Canyons are primitive dirt ramps. At current lake levels, none of these launch ramps are in service. The river raft take out ramp is gravel. Boat launching is at your own risk. Four wheel drive vehicles are recommended for all launching. Contact Hite Ranger Station for current conditions. (435) 684-2457

Hite is known for having the best fishing on Lake Powell. Walleye and Striper are most common on this side of the lake. Small and Largemouth Bass are also common. The Colorado is within walking distance from the Hite Campground and fishing includes catfish, trout and walleye swimming upriver from Lake Powell.

ATV and Mountain Bike trails include Jacob’s Chair, Blue Canyon, Paiute Pass and Chile’s of BLM and Glen Canyon trails and roads. Many roads to these trails are within a short drive, walking or biking distance. Rent an off-road UTV and take the whole family on an unforgettable adventure.

Jet Ski up to Sheep Canyon. Rent a kayak for a day of world class bass fishing and a shuttle ride back to your campsite. Spend the day exploring some of the most spectacular and remote slot canyons in the Southwest.

Explore Dark Canyon and take a dip in the refreshing pools.

We offer Coleman RVs available for rent in our RV park. They have cold freezers and fridges, microwaves, gas ranges, and ovens. The rentals come stocked with plates, cups, pots and pans, silverware, and cutlery. Each camper has a queen sized bed, a fold out couch for additional sleeping space and single bunks at the rear of the RV. One of the Coleman’s is a bit larger, featuring a larger kitchen and dining area, and can sleep two more people for a max of 8 and 6 for the smaller RV. Rentals include bedding and toiletries. Rentals start at $125/night. These are stationary rentals, not for over the road use. 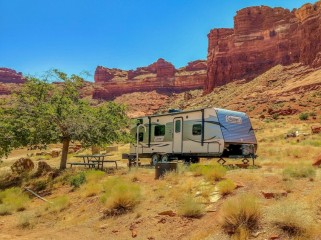 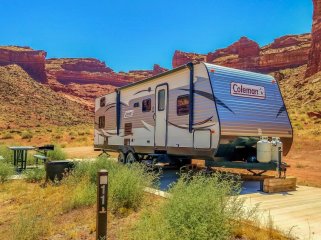 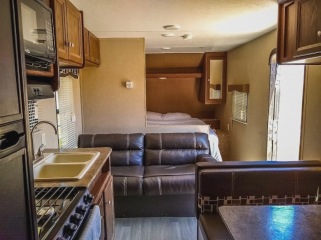 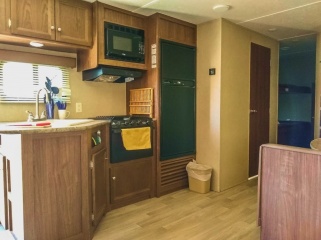 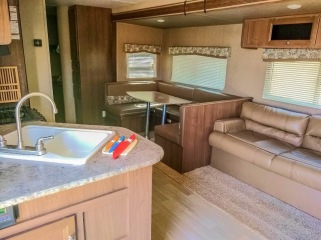 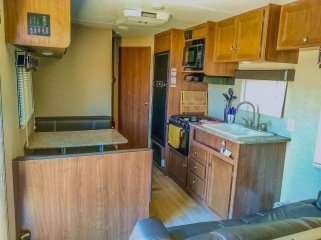